The loom and spindle have served as social signifiers for thousands of years, their attendant signifieds shifting as technology, labour markets, gender stereotypes, industrialisation and colonialism reinscribed their worth. Dating at least to 5000 BC, the loom represents one of the most consistent means of textile production and is accordingly value-laden: denoting a wealth of time in its earliest users, of income in early modern patrons, or associated with the possession of artisanal knowledge, prized correlative to the status of its practitioners.

A laborious and time intensive production method, handweaving has always been somewhat divorced from necessity. Its connection with ancient luxury engendered a network of mythologies; in Egyptian, Japanese, Navajo, Baltic, Nordic and Germanic myth, goddess weavers and spinners were associated with fertility, creation and agriculture. This pantheon created a link between weaving and reproduction that cast the loom as an emblem of ancient stereotypes of femininity. The Greek myth of Philomela tells of how she wove the truth of her rape by sister’s husband after he cut out her tongue, whilst in Homer’s Odyssey, chaste Penelope weaves as a ploy to prolong choosing a new suitor; the completion of her shroud is associated with the culmination of Penelope’s faithfulness. Standing simultaneously for a reproductive concept of femininity, chastity, and the deviousness so often associated with women, the loom recommends itself as a tool for upholding and subverting gender identities.

Unlike myth, history has seen ownership of the loom transferred across genders according to contemporary perceptions of labour. The Old English term for weaver, webster, is feminine, and middle age weaving families worked from home as a unit. With the introduction of the 11th century horizontal loom, which produced larger cloth in more complex patterns, commercialised weaving became regulated by male-dominated guilds and branded an artisanal craft. Women were relegated to spinning. The dynamics of the loom shifted further between 1761 and 1850, when technological developments saw weaving transferred from the home to the factories. The mechanisation of the industry severed the link between weaving and its perception as an artisanal skill. The cheap labour of working class women was preferred by power loom owners, leading to riots against the decline in male employment. As the division of labour and the dichotomies between home and work, art and craft, ossified, the power loom occupied an ambiguous place in the centre of this nexus, divorced from any expertise.

It was Bauhaus student Anni Albers who recalibrated artistic attitudes to weaving. By the time the Bauhaus opened its weaving workshop in 1919, it was denigrated a feminine craft by virtue of its lack of skill. The weaving workshop was the only studio open to women, with founder Walter Gropius writing, ‘we are fundamentally opposed to the education of women as architects.’ Contempt drips from Master of Form Oskar Schlemmer’s remark, “where there is wool, there is a woman who weaves, if only to pass the time.” Georg Muche, the Master of Weaving, refused to weave altogether. The weaving workshop was created in anticipation of a commercial uplift, supporting the Bauhaus’ vision of uniting art with industry, but upholding the division of the two along gendered lines.

Frustrated at being barred from the glass workshop, Albers eventually embraced weaving, finding within it the space to carve out an interdisciplinary practice that refused to distinguish between textiles, abstract art and modernist architecture, recognising correlations in the construction of colour, form and texture. Her formalist approach was influenced by Pre-Andean tapestries, which functioned as linguistic texts. Referencing these in her textiles, Albers’ work engages in an ageless visual language of assemblage. A celebration of hapticity,  she revelled in the slowness of backstrap looms, one of the oldest forms. Albers also designed rugs and wall hangings for machine production, which she viewed as structural components of their end environment. Aesthetic and functional, cerebral and commercially successful, Albers’ work reclaimed weaving as a skill, and laid bare the fallacy of the divisions between art, craft and labour that had coalesced around the loom. Her work later influenced denizen of weaving Shiela Hicks, who met Anni through Josef Albers, and whose work challenges the physicality of weaving, creating sculptural pieces of high art from yarn.

Given its unique potential to bear witness to contemporary conceptualisations of identity, it is no surprise the handloom continues to be appropriated in rebellion against an unsatisfactory status quo. Revelling in its historic associations, contemporary weavers and spinners advocate for social justice from within a practice that represents the individual over the corporation.

Judy Chicago is one such artist. The entry banners for her work, The Dinner Party (1974-9), bear a utopian ode to womanhood, a celebration of historic and mythical women. Chicago commissioned the family owned San Francisco Tapestry Workshop to weave the pieces on a high warp vertical Aubusson loom, an act of reclamation for the women forbidden to use them during the Renaissance. Unlike traditional Aubusson looms, these were custom-built to allow weavers to face the front and see the artwork as it was created. An accompanying text for the later Birth Project (1980s) as displayed at Baltic Gateshead reveals that a young Chicago would have felt ‘humiliated’ if “a male artist or dealer discovered me . . . at the embroidery machine or loom.” Her mature works lean into weaving’s feminine connotations, linking them to its archetypal mythologies rather than their fragile association with labour.

The appropriation of weaving as a means of feminist discourse has only prolfierated since. As weaving Artist Laura Rokas, who creates eye-meltingly bright, zeitgeisty quilts as critiques of social media, states, “textile arts are painstaking by nature. I slipped easily into the role of a weaver as my work often has masochistic tendencies in both process and imagery.’ There is a knowing sense of exposure to contemporary handweaving within the singularly public realm of art that comes of the physicality of the process and the injustice embedded into its history. 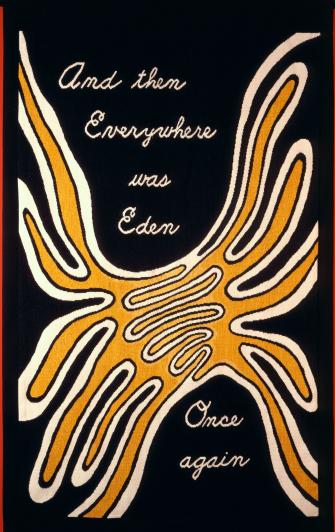 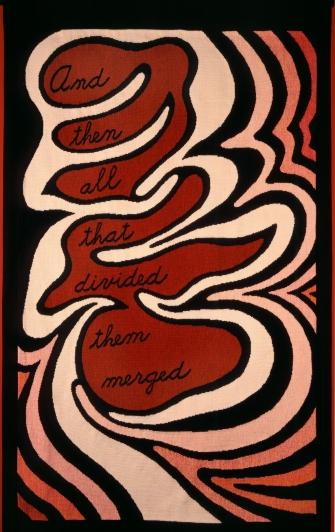 American weaver Diedrick Brackens’ work interrogates racial injustice and sexual discrimination. As a queer Black American, he relates his experiences through a collage of intertextual references. Much of his work is figural, rich in allusions to influential black portraitists such as Kehinde Wiley and the late Rotimi Fani Kayode, as well as American folk artist Harriet Powers. Motifs of catfish and horses reference what Glenn Adamson terms a ‘southern mythology’ displayed amongst Greek heroes, harnessing the universal narrative power of the warp and weft of thread. This narrative is embedded in the very fibre of his textiles, which blend techniques across West African stripweave, Flemish tapestry and American story quilts.

Brackens’ work is produced mainly from cotton. Noting cotton’s ‘historical significance in the U.S. relative to enslavement, violence and subjugation,’ he conceives of handweaving the fabric as ‘a small way to pay tribute to those who … worked with the material under very different circumstances.’ Amidst this milieu of references, Brackens, too, embraces the slowness of handweaving as a sort of time travel, by which the tapestry becomes a manuscript of historic figures. In his recent series ark of bulrushe, tapestries bear cosmological symbols alongside the iconography of Freedom Quilts, used to communicate with enslaved people travelling the Underground Railroad. Displayed amongst woven baskets that evoke Moses’ biblical arc, the works conflate the micro with the macro, the past, present and future. Brackens harnesses tapestry as a vehicle for myth; the transmission of skill, tradition and heritage, pinpointing contemporaneity as one moment in an unstable teleological narrative.

Given the ease and availability of mechanised looms, the adoption of older technologies continues to represent a conscious departure from contemporary values. As a tool no longer subservient to time, rejection of the power loom represents a rejection of mass consumption. The destructive tide of fast fashion that has taken over the market can be directly attributed to  the development of the mechanised loom, which facilitates the cheap and speedy production of clothing that can be replaced multiple times in a season and sold at retail for as little as 80p. When Roland Barthes writes that ‘the cultural work done in the past by gods and epic sagas is now done by laundry-detergent commercials’, it is the seemingly unknowable monolith of commodity culture that he refers to.

In her project The New Age of Trichology, materials researcher Sanne Visser rejects this value system, spinning rope with human hair as a means of exploring the circular economy. For Visser, hair is an abundant and locally available resource which she collects on a hyperlocal level direct from the hairdresser. Her contemporary spindle, the Rope Machine, was developed with artisan ropemakers, tapping into ancient knowledge sources. Sanne’s design is created to be as accessible as possible – it is portable, affordable, and the blueprints are open source, allowing for a proliferation of individual makers. She emphasises the opportunity that the machine engenders to ‘work … without much need from experts or others.’ Visser shrugs off the association of spindles with the concentration of mechanised labour in centres of capitalism at the cost of the individual craftsman, but also the valorisation of the craftsperson themself, advocating instead for the sheer pragmatism of making-to-use. Her latest project, Locally Grown, developed during a residency at the Design Museum, opposes the vast systems and structures in which contemporary spinning is embedded. In a direct comparison with the clothing industry, which she brands a centre of exploitative labour exacerbated by dangerous air and water pollution, Visse highlights the precarious infrastructure that leaves farmers, spinners and textile producers economically vulnerable. Would hairdresser farmers, she wonders, benefit or be exploited by hair-recyclers?

With such a storied history, it is no surprise that weaving has been adopted by artists and makers as a tool for debunking outdated conventions. Despite its seemingly ageless present-day association with housebound women, the loom’s referent has never been fixed but has constantly been in flux, reflecting the most pressing concerns of the day. Technology has always been gendered according to its worth, but by making deliberate choices to eschew technological innovation, its users adorn the handloom with a new set of references that reject social constructs and broad categorisations more than they seek to define new ones. Now more than ever, the loom operates as a Trojan horse through which to insert discourse around social justice into commodity culture.

Olivia Bailey is Assistant Curator of Public Programmes at the Design Museum, London. She holds a degree in Ancient History and a Masters in History of Art, cementing an interest in the complex histories of material culture. She has lectured on feminism, design and cultural education at Kings College London and the Feminist Library, and co-hosted and co-produced the Intersectionality episode of the latter’s recent podcast series. She also sits on the grants panel of the Architectural Heritage Fund. As well as Decorating Dissidence’s ‘Wearable Art’ issue, her writing has featured on the Gallery Collectors and the Gallyry.