Figure 1: felt with no structure

Felting is one of the oldest textile practices that can be considered a primitive craft. Perhaps the identification as primitive comes from its being nonwoven. Felting requires no structure, system,  or analytical advancements like weaving or knitting do. The practice is very true to the material: it  is essentially a lump of wool being squeezed into a flat surface by applying force, taming the  wildness of wool into a controlled form of felt. Because of this primitive aspect, or maybe because of the courage to show the wool as it is, Gilles Deleuze and Felix Guattari called felt an  anti-fabric:

“It (felt) implies no separation of threads, no intertwining, only an entanglement of fibres  obtained by fulling (for example, by rolling the block of fibres back and forth). … An  aggregate of intrication of this kind is in no way homogeneous: it is nevertheless smooth,  and contrasts point by point with the space of fabric (it is in principle infinite, open, and  unlimited in every direction; it has neither top nor bottom nor centre; it does not assign  fixed and mobile elements but rather distributes a continuous variation).” [1]

The anti-ness of felting is not only about the visuality of the outcome, but it is also about the  process of creating the outcome. Despite having some techniques, felting does not follow a  particular order in the process, nor does it require processing fibers as a necessity. Rather, felting requires following the flow of the fiber entanglement. This free and open process is  reflected with the involvement of the tools as well: felting can be done without any tools in the traditional sense. The main tools needed for transforming wool fibers into felt are warmth and  friction that comes from movement. As a result of the gaps between molecules in wool fibers, they can entangle with the movements of sheep and wind. When it is done within the human  context, the more guided movement of the human body and hands can entangle the wool fibers by utilizing warm water and soap as catalyzers.

This material-based craft practice essentially relies on two types of bodies: the body of a human  and the body of a sheep. The body of a sheep is covered with wool. This wool keeps it warm and  cool depending on the weather, it protects the sheep from various surfaces, and it senses what  happens around itself. This body constitutes the main resource of wool as there is no wool  without the sheep and also shows the initial examples of wool being felted with the forces of the  air and sheep sweat. 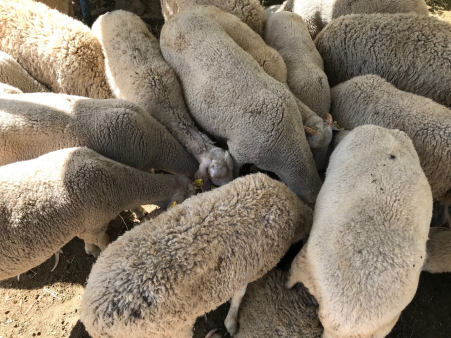 Figure 2: sheep bodies touching each other

The human body senses how the wool acts by touching, hearing, smelling and seeing the wool.  The hands delicately sense if the fibers are merged or if they need further back and forth movements. Although the touchpoint is the hands the entire body follows the material  movements to support the hands and the becoming of a surface from fibers.

Touching the material world can be described in many ways, like crafting to be more precise and  technical or dialogue to be more metaphorical. It can also be described as a dance to highlight its  collaborative aspect. Sociologist Andrew Pickering [2] argues that when we interact with things,  our performances, such as the movements of the human body and the changes that the material  undergoes, create a dance of changing the roles of taking the lead and following the other  partner. Experiencing material resistances and responding to them let this dance emerge. 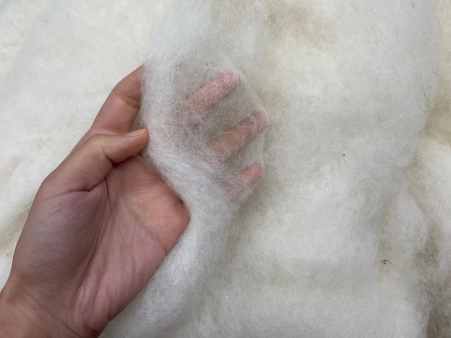 Figure 3: hand entangles with the wool

In fact, when felting is analyzed as a practice with partners the dance becomes more apparent:  the body moves back and forth, the pressure shifts from hands to the shoulders while the waist  becomes the turning point and weight is moving from toes to the heels. Finally, the pressure  goes back to the hands again and this choreography is repeated several times, unintentionally  you find yourself humming, the head falls to the front and joins in the ceremonial unity. While the  body is moving, the wool lump also goes back and forth with the squeezing of the hands gets  smaller and pressed. The fibers rub each other until they are fixed into their each other molecular  gaps.

Once someone starts getting to know their dance partner better, which is the wool, they will also  realize that their partner is, like the felt outcome, also heterogonous. The raw wool constitutes  fibers as well as its tangible history with the sheep that it was once part of. For instance, the  small hay pieces tell the environment that the sheep lived, the tone of yellowness hints at the  amount of time that the sheep were enjoying under the sun, or the curls and thicknesses of the  fibers can generate questions about the genetic heritage. In a way, when we are dancing with  wool to make felt, we are also dancing with sheep even if the sheep is not present. Thus, felting  is not only an anti-fabric but it is also an anti-dance: partners are present without sometimes not  being present bodily.

Although they do not come in contact with each other, the human body and the sheep body  collaborate from a distance through the wool to create a new form. These bodies are tools to  touch the world and to communicate with each other since, through the body, one can diffuse  themselves into the world and become one with it. In a way, the body becomes a tool to develop  a new language to follow other bodies, be it human’s, sheep’s, or the material’s body. When  engaging with wool more consciously, one can understand how bodies entangle with each other,  with materials, and with the world.

Body as a tool is not an easy topic to discuss. For decades, feminist scholars discussed human  agency, specifically in gender research, with their body autonomy. And for centuries, scholars  separated the mind from the body, assigning the thinking role to the mind and the role of acting  to the body without meaningfully contributing to knowledge production. Although identifying the  body as a tool might evoke associations to such restrictive and dualistic thinking that  instrumentalize the body without acknowledging its substantial role in the knowledge production and its very being, my aim in this text is the opposite.

As philosopher Maurice Merleau-Ponty [3] claims, tools become extensions of the body to  perceive the world. With his infamous example of the blind man and his stick, Merleau-Ponty  points out that the body does not end where their feet are but where their stick reaches. They  can sense, feel, and know what lies in the area that their stick can reach. Cognitive archaeologist  Lambros Malafouris [4] works with similar notions to understand the development of the human  mind. He focuses on creative practices and material engagement to understand various unifications and how they shape the human mind. In his example of throwing clay to the potter’s  wheel, Malafouris [5] claims that through engaging with things human brain becomes with those  things. Those tools become mediators of experiencing the world as they allow for creative  material engagement.

As the examples show, tools should not be understood as static objects but as active things to  act with. In the context of craft, a tool is an interface, a mediator between the body and the  material to realize an action and creatively engage with the world. It physically translates the  human language into the material language. While doing so, the meanings that are created have  multiple aspects and layers. Thus, tools are essential in transforming situations since they can  fulfil their roles while also proposing unforeseen ways to be employed and lead to new  possibilities. Because although tools are often designed for facilitating particular actions, they can  also be used for unintended ones. For instance, with its sharp prong, a knitting needle is a tool to  stitch yarns to create a piece of textile. But it can also be used as a back scratcher, shredder,  dough decorator or even weapon. Thus, tools are the things that have the power and forces of  facilitating possibly an unlimited number of actions. With this power that they embed tools lead  humans in their cognitive development.

While crafting, the tool and the body unite to act, respond, and sense all the time. This unification  turns the body into a tool and the tool into the body, both embedding activeness and aliveness  while facilitating interactions and translating performances.

In this sense, calling the human body a tool is a way to emphasize the idea of following the  material and its history rather than forcing what the human wants. This also highlights the need  for humans to be adaptive to situations to respond and blend in the flow of the material world to  interact with it rather than searching for fixated structures and systems, like anti-ness of felting.

If we understand the actions of the body as ways of translating the material world into the human  world and vice versa, we might start paying more attention to what happens around us. This  attention allows one to realize that the dance is not only with a single partner, but it is a mixer  dance. As we are being in this world, we are dancing with any thing and any one that we  encounter. The mixer dance is our way of entangling with the world. This dance facilitates a  harmonious exchange between histories, spaces, and ideas that are not necessarily limited to  crafting but reach out to ways of being in the world.

Bilge Merve Aktaş is a designer, researcher, and educator. In her creative practice, she works and experiments with raw wool as a thinking tool. In her doctoral research (Aalto University, 2020), she examined human-material interaction from the perspective of material’s agency with studies in felting. She is continuing her research with wool by focusing on material’s formative power and its role on relating to the environment and the world. With her research, she is promoting crafting as a way of thinking with materials to offer new ways of approaching bigger societal and environmental problems. Some of her research interests cover topics such as materiality, textile crafts, nonhuman agencies, the human-environment relationship and practice-led research. Currently she is working as a post-doctoral researcher at the Department of Design at Aalto University, Finland.